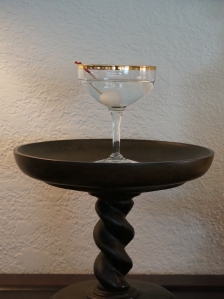 Like I Need an Excuse to Put a Martini on a Pedestal.

As I stated in The Martini Variations, about a month ago, The Martini has a long and storied past. Its true origins are unclear, but it is clear that Prohibition pushed the cocktail into the spotlight. The “ease” of acquiring Gin at that time, and the simplicity of the cocktail made it a staple at speakeasys.

By all accounts, the Martini first reared its head sometime in the 1800s. The Martini was most assuredly invented in the United States, which was undergoing a cocktail creation explosion.  And, the first Martinis were made with Genever (aka Jenever, aka Holland Gin) which is Gin’s grandfather (and may even be Whiskey’s grandfather, too.)

When London Gin, aka “Dry Gin”, became available, the Dry Martini was born.  Yes, a Martini was made with sweet, aromatic Gin and Vermouth originally.  It had more in common with a Manhattan than most folks realize.

As for where The Martini came from and who invented it…

The town of Martinez’ claim to having invented the Martini is tenuous at best.  Their whole claim falls to a man named Julio Richelieu; Richelieu reportedly owned a bar on Ferry Street and invented the drink during the Gold Rush in exchange for a gold nugget in the mid 1870s.  Unfortunately, public records to not list anyone with the last name “Richelieu” as having operated a bar in Martinez from 1870 to 1917.  And, by the 1870s, the Gold Rush was long over.  And… the town of Martinez didn’t start celebrating the Martini until well after 1950.

No, the most likely inventors of the Martini were the proprietors of the “Turf Club” in New York some time around 1880 to 1883.  The “Turf Club Cocktail” being made of Gin and Vermouth was listed in the “Bar-Keeper’s Handbook” published in 1884… the same year that the first reference to the “Martinez” appears.
HOWEVER, further complicating matters was the similarity between Genever Gin and Whiskey in the 1880s.  A “Manhattan” was described as a drink made of “whiskey & vermouth” AND as a drink made of “gin & vermouth.”

The name itself comes under close scrutiny.  Booze historian David Wondrich postulates that the name may have been slapped onto the drink after Martini Vermouth made its way to the U.S.  Yes folks, it may have not even been called a “Martini” nor a “Martina” nor a “Martinez” when it was created.

So, we may never really know who came up with the Martini, but we do know that it is delicious and deserves its proper place in history.

If you’d like to learn how to make a modern Martini, please pop over to my article “The Martini Variations” for recipes.