There Can Be Only One.

That’s right.  I’m not chickening out like year.  I’m naming the ONE; the most impactful spirit of 2014. Clearly, I had one booze that exceeded my expectations.  It continues to do so and even has me rethinking the rating of last year’s winner.

The 2014 Booze of the Year is:
Orphan Barrel’s Barterhouse 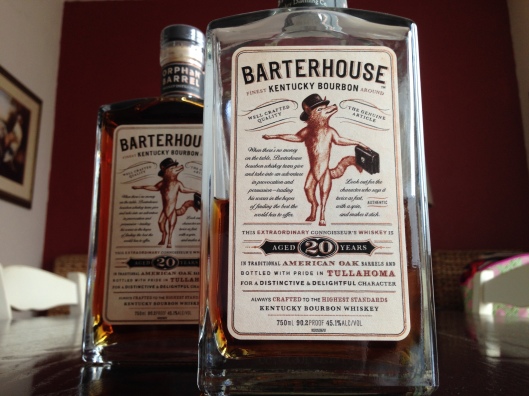 Booze of the Year for 2014: Barterhouse

Barterhouse went from a Bourbon that I didn’t even want to talk about, to the best booze of the year before I even wrote about it.  I’ve been sipping on Barterhouse since not long after it was released.  I was taken aback by its smoothness, character, fullness, and flavor.

But I didn’t even want to review it because, as a one barrel release: when it’s gone, it’s gone.  There was only one barrel of Barterhouse and that barrel has been completely bottled.  When those bottles have been sold, there is no more.  And that thought makes me sad. (Though, rumors persist that a second release of Barterhouse is possible. So, I’m clinging to hope!)

Anyway, I completely love Barterhouse.  Here’s what Whisky Advocate (formerly known as Malt Advocate) had to say about it:

Very creamy and soothingly sweet, with notes of honeyed vanilla, crème brûlée, sultana, orange creamsicle, peach cobbler, and a subtle array of tropical fruit. Soft and mellow on the finish. It’s very easy-drinking and should be enjoyable under most moods and circumstances. Very nice indeed!

And they agree with me: Barterhouse is the best of Orphan Barrel’s original three releases.

If you enjoy whiskey and bourbon, run to the store and get a bottle of Barterhouse while you still can.

Only time and taste will tell.