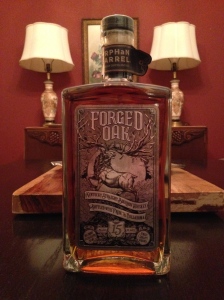 “Forged Oak”… a force to be reckoned with.

I have a picture of four bottles of Orphan Barrel’s offerings all in a row… it’s lovely.  And a lie.  I’m out of Rhetoric.  (For now!)

Anyway, Forged Oak is the latest (as of March/April 2015) release from Diageo’s Orphan Barrel line.  As you know from my previous entries, I am a fan of their work.  Finding long lost barrels of bourbon and getting them to the public in limited releases is genius.  Of course, it means that “once it’s gone, it’s GONE” but hey, it’s better to have loved and lost, right?

Anyway, let’s away to my signature “Let’s Not Mince Words” quote, shall we?

Orphan Barrel’s Forged Oak is a symphony of barrel notes wrapped in a velvety blanket of sweetness.

At 15 years of aging, Forged Oak is the youngest of Orphan Barrel’s releases.  But don’t let “just 15 years” lull you to a false judgement. Forged Oak is a testament to what the aging environment can coax out of a barrel.  It is so completely soaked in barrel notes that you might mistake it for an even older Bourbon.  It’s only tell-tale giveaway is its peppery finish.  It is *not* a hot finish, but it is a long spicy ride, to be sure.

Now, I love Barterhouse, you know that.  You will also recall a rather fantastical posting by me about how Lost Prophet stacks up against Rhetoric and Barterhouse.  There will be no such comparative posting involving Forged Oak.  Neither will I wax poetic about it.

This is a Bourbon that demands respect.  And it’ll take it from you, whether you want it to or not.  Sip it on its own or you’ll miss out.  I’ll allow you one ice cube in your glass on a hot day, but my strongest recommendation:

Two ounces in a glass.  Done.

Orphan Barrel says that Forged Oak was aged at the historic Stitzel-Weller rickhouses.  Why does the name “Stitzel-Weller” ring a bell?  Well, it used to be the home of the Van Winkle distillery. And since Stitzel-Weller was closed in 1991, that would mean the last remaining new barrels might have been put in there about… well, I’ll let you do the math.

I’m not saying that Forged Oak is a long-lost barrel of Old Van Winkle.  Likely, it ain’t.  I’m guessing there’s some rye in this mix, and we all know that Old Van Winkle uses wheat, *not* rye.

Why do I think there’s rye?  The spice.  Yeah, 90% alcohol will burn you, but the spices in Forged Oak say RYE.  Corn gives it its proof and its sweetness, barley malt gives it flavor and character, but rye gives it that spice. And the spice is good.

Of course the time spent in the barrel that sows in the vanilla, walnut and toasted wood flavors.  Again, don’t turn your nose up at a “mere” 15 years.  Consider your current sipping Bourbon.  Unless you’re holding onto a bottle of Weller or one of Orphan Barrel’s other offerings, chances are: you’re sipping 4 year old Bourbon.
Remember:
Bourbon labeled as straight that has been aged under four years, must be labeled with the duration of its aging.

No age on your bottle of “Straight” Bourbon?  It’s likely 4 years old.
If it’s not labelled “Straight”… it could be as young as 2.

So no thumbing your nose at Forged Oak for its age.  Besides, you’d miss out.

Speaking of missing out, chances are you’ve already missed owning a bottle of Forged Oak.  And I’m sorry about that, because: