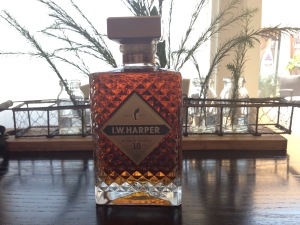 When I finally realized that Beefeater was the classic London Dry Gin I’d been seeking for the past 20 years, it was a new beginning.

But having some long lost-now found I.W. Harper 15-year old Bourbon could be the end.

It was like finding something I never knew I wanted, but having it completed me. Being without it might damage my soul.

And it is the soul within that little bottle that makes it. The bourbon itself is flawed & uneven, and yet so sweet & complex.

Cutting to the chase:

I.W. Harper 15-year is a puzzle. But it’s the best kind of puzzle in the world.

The vanilla and nut-forward notes make this a bourbon that must be taken seriously. But the heat and bite mean that its 15 year rest in a barrel wasn’t long enough.  There’s a rawness to it, even while it remains refined and soaked in barrel notes.

Normally, this dichotomy would tick me off to no end.  You’d read my rantings and whinings about “oh, just one more year would have matured it perfectly.”  And no, this version of I.W. Harper tastes nothing like what you might have had 20 some-odd years ago… which might annoy some.

This 15 year old bourbon comes to us from Diageo, the company behind Orphan Barrel, Captain Morgan, Johnnie Walker, etc.  Now, speaking of Orphan Barrel, I can’t help but think of Forged Oak.  A little birdie mentioned that Forged Oak and I.W. Harper 15 share the same mash bill. Well, if you care to, check the press releases on both and compare. I’ll let you draw your own conclusions.  But I will say:

Everything that I enjoy about Forged Oak, is in I.W Harper 15 Limited, just a tad softer.  That’s not surprising since we’re comparing 86 proof to 90.5 proof.  But what’s even funnier is that a touch of water actually amps up I.W. Harper. The flavors become even clearer.

The nose holds serious wood notes; all the baking spices you’d get out of a much older bourbon are present: vanilla, cinnamon, and slight cloves.  Toasted nuts; walnut and almond predominantly.

My whining centers around the unevenness.  The nose and flavor don’t quite match up.  The nose makes wonderful promises that the taste doesn’t quite deliver.  The vanilla is dialed back.  The toasted nut flavors become just nut flavors. No caramel corn, no brown sugar.

All that said, I.W. Harper 15 is a fantastic bourbon. I seriously like this bourbon. In spite of its flaws, I find it a wonderful, tasty enigma.

The nose holds serious wood notes; all the baking spices you’d get out of a much older bourbon are present…

And no… I won’t stop blogging. The perfect bourbon is still out there… I’ll find it!

If you enjoy heavier than usual barrel notes in your bourbon, you might want to get a bottle while you still can.