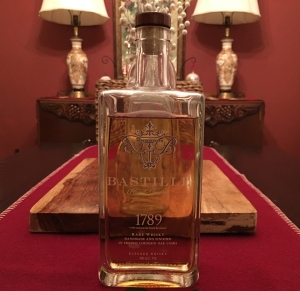 The last of the Spirits that will Haunt you this Winter Solstice is the “Spirit of Christmas Future.”  And that Spirit is Bastille 1789.

So, why is something with an ancient number like “1789” my pick for the future?  Because it represents what will need to happen in the world of Spirits to press forward: change grounded in tradition.

Let’s be honest: ALL of my Dickens picks (Bummer & Lazarus and Pau) are modern takes on old spirits.  So they all represent what needs to happen.  But Bastille 1789 is an obvious, glaring, bold step towards the future: a Scotch style Whisky, made with water filtered through limestone like a Bourbon, aged in casks like a Rum, hailing from a region known for Cognac.

Let’s get right to the Not Mincing Words bit:

Light yet smokey, Bastille 1789 is a well balanced old-world whisky with modern sensibility.

There’s a reason I don’t rate Scotch Whisk(e)y up here: it’s too subjective.  Even when I reviewed Hibiki 12, I wasn’t really sure I should post it. There’s nothing wrong with Hibiki 12, I just felt that it was trying too hard to be too many things.  And other reviewers love that about it.  The same could be said for Bastille 1789, however…

The smokey malt nose of Bastille draws you in. It reminds you of a nice Scotch whisky, but it’s a light smoke… Not an overpowering punch to the nose like so many heavily-peated whiskys.  A second sniff reels in some citrus sweetness and a touch of a floral note.  All good things, in my opinion.

The flavors all match up with the nose; the malt comes across as a cream biscuit, the smoke is present but not overpowering, lemon & orange peel make their presence known, and the floral note from the nose is now clearly cherry.  Complex to be sure, but all the notes play well together.

I was tempted to treat this whisky like I would a Congac and put it in a snifter.  Instead, I treated it like a whiskey and put it in a white wine glass.  Good thing, too.  Warming it just makes it acidic.  A slight chill is nice and tames some of the smoke.  An ice cube really mellows out Bastille, turning it into a lovely companion on a warm night.

The smokey malt nose of Bastille draws you in.

Bastille 1789 really has a lot in common with Scotch and even Irish Whiskys, thus its treatment of the human palate will vary from person to person.  For this person, it’s a hit.

Thus endeth our Haunting of Spirits.

“...And it was always said of him, that he knew how to keep Christmas well, if any man alive possessed the knowledge.  May that be truly said of us, and all of us!”