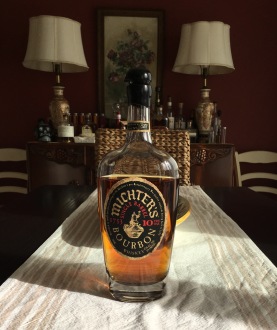 I’ve had a soft spot for Michter’s for a while.  Their Sour Mash, which I haven’t reviewed yet, is likely my favorite in that category.  It’s a damn fine sipping whiskey, regardless of the weather.  And I am a fan of their regular Bourbon, which comes in at 8-years old. You’d think there wouldn’t be much of a taste difference to justify the OUTRAGEOUS price differential, but… well, more on that later.

Anywho, Michter’s [now] produces a limited run of 10-year old whiskey each year.  And since their re-emergence onto the scene was – when was that again?- 13 years go now, it makes sense.  (Though, you’ll have to explain where their 20/25/30 year offerings come from…)   And because these are small batch, long-aged whiskies, they will vary in flavor and quality from year to year.

Michter’s 10-year old Bourbon is tasty and smooth.  At 94.4 proof, I was expecting more whiskey bite… or any whiskey bite.  This ain’t that kinda whiskey.

The nose is like spiced caramel corn or toasted toffee.  Sweet vanilla and baking spices galore.  I keep going back for more scent, and it’s lovely every time. Sweetness just keeps on giving.

The palate backs up the nose. Toasted almond toffee, sweet corn, sweet vanilla, cinnamon, caramel, even a touch of creamy biscuit, all dance across the tongue… but never burn.

The finish is long and warm.  It leaves that caramel corn/toasted toffee flavor on the back of your tongue, beckoning you to go in for another sip.

Now: why on Earth would you want to spend a hundred (or more) dollars on a bottle of Bourbon that’s only two years older than the regular offering?  Well, I can’t speak for other years, but it seems that Michter’s had a honey barrel for 2016. This stuff is mindbogglingly great for being “only” 10 years old.  I’ve spent more on 15/16/20/21 year old Bourbons, and most (save Forged Oak & Lost Prophet) can’t compete. While I’ll freely admit that the price tag is outrageous, I’ll also be the first to stand up and say:

Michter’s 10-year old Bourbon is probably the best Bourbon I’ll have all year.

And, I’ll also say this: