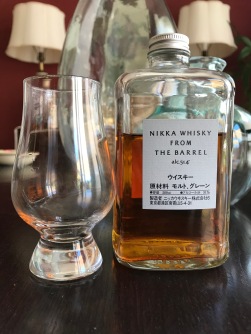 I’d be remiss if I didn’t review “Nikka Whisky From Barrel” as it seems that every alcohol-related blog out there has a review of it.  Personally, I think everyone is reviewing it because it’s available, and moderately priced.  (Although, not really)

While procured on a trip to Japan, my bottle hilariously has French on the back label.  I’m guessing it was supposed to be an export bottle, but it never made it on the boat.

At any rate, Nikka Whisky “From The Barrel” is, as you’d guess, higher proof.  The higher proof immediately reminded me of an American Bourbon, but that faded when the burn faded.

On to the “Let’s not mince words™” statement:

Nikka Whisky From The Barrel is hot, tasty, and approachable.

Sadly, I don’t mean “approachable” in a good way.  I’ll get there.

But let’s talk about the nose. Vanilla (as you’d expect), apricot & white peach (but subtle), cloves, and allspice.  Nothing out of the ordinary, so nothing really leapt out at me on the scent here.

The palate is attacked by the high proof. Yeah, count on a whisky burn here. Water or ice would cure that, but will also kill all the subtle notes on the nose and tongue.  What flavors eventually come through are cloves, allspice, black pepper, vanilla & toasted almond (nice barrel notes), and a touch of baked apple.  The baked apple is combination of the mild acidity, a hint of sweetness, and touch of creaminess.  Sadly, the “baked apple” isn’t pronounced enough and tends to fade away after the second sip.  But those first two sips are damn tasty.

The finish, as expected, is hot.  There’s a touch of barrel smoke and strong hit of white pepper in the finish, but it all fades away quickly.

And, as you can tell, I am not enthusiastic.  It’s as if someone at Nikka said “Let’s make a whisky that will offend no one, but crank up the alcohol content to make it a contender!”  I see what they did here. They made it “approachable.”  Just a touch of water or a small ice cube, and Nikka Whisky From The Barrel is non-objectionable.  The problem for me is that it’s also unremarkable.

Now, I got my bottle in Japan, but it can be found on the Internet for around $40 a bottle. If that sounds reasonable to you, remember that this is a 500ml bottle, not a full Fifth.  And if it were a Bourbon, I’d call it overpriced at $40.