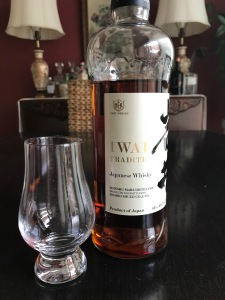 I was gifted this bottle about a year ago as thanks for helping out on a job (that I wasn’t actually on.)  But, I do know that Iwai Tradition is not a difficult bottle to come by and should run you around $65 U.S. (A touch steep in my opinion for what you’re getting.)

I have written up other Japanese whiskies that at a passing glance reminded me of American Bourbon.

But Iwai’s “Let’s not mince words™” statement will tell you:

Iwai Tradition, with its heavy caramel and baking spices, is the gateway to Japanese Whisky for fans of American Bourbon.

Let’s talk scent. First up, none of those crazy/complex notes that I’ve come to expect from Japanese whisky. Loads of caramel or brown sugar, a nice hit of vanilla, then gingerbread cake: ginger, cloves, and allspice.  All wonderful things to have wafting out of your Glencairn glass.

Now, the taste. With 80 proof, no real whisky burn and no astrigincy at all. The flavors match up with the scent almost exactly; heavy caramel, vanilla, ginger, cloves, allspice, toasted almond (nice barrel notes), and a touch of wildflower honey. The barrel notes are what really kicks Iwai Tradition into Bourbon territory. I don’t know Mars really wanted their Japanese Whisky to so completely remind me of Bourbon, but it sure does.  They could give lessons to newer U.S. distilleries in how to make an excellent American whiskey.

Which leads me to ask: What is it then, that makes this whisky Japanese?  Well, its heritage and attention to detail.  First up, the flavors don’t hit you all at once.  They’re layered.  A very Japanese trait. Then, the multiple barrel aging; Iwai Tradition is aged in Bourbon, Sherry, and win barrels. And then…

The finish.  Clearly, some peat was used in the process as there’s a touch of smoke to an otherwise honeyed finish.  And it’s a long & warm, smokey & honeyed finish.  Nearly Scotch-like, but also very Tennessee.

Because I simply adore Bourbon, and I’m equally enthusiastic of Tennessee Whiskey, it’s very difficult for me to knock Iwai Tradition. But I will say this: if you’re looking for a Japanese copy of Scotch, steer clear. But if you want something unique and yet familiar: