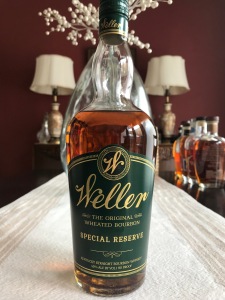 Once again visiting the hallowed halls of the Buffalo Trace Distillery, we find Weller “Special Reserve” aka, “Weller Green Label.”  If memory serves, the bottle and label were redesigned in September of 2016.  The first time I had this stuff, it was “W.L. Weller Special Reserve Kentucky Straight Bourbon Whiskey.”  Apart from the “W.L.” all that text is still on the front of the bottle.

All Bourbon, by law, must have at least 51% corn in its mashbill. Barley is the workhorse of Bourbon, so it remains. What’s up for grabs in that remaining 49%* is rye or wheat.  Most Bourbons use rye in their mashbill as it adds zing, bite, pepper… “spice” to the flavor table. Wheated Bourbons replace rye with wheat.  This tames the spice and bite and allows the corn and barrel notes to shine a bit more.

* = Most wheated Bourbons use a higher percentage of corn; pushing that 51% to more like 70/75%. The remaining 25-ish percent is split between the barley and the wheat. The higher corn percentage also lends to more sweetness in the final product.

And more sweetness is why, in my opinion, wheated Bourbons like Weller and Pappy are all the rage these days.

As we’ve sailed past the point where I’d make a “let’s not mince words” proclamation, allow me to say: Oh, Weller. How I’ve missed you!

Weller, by and large, is a pain in the ass to find in my neck of the woods.  And while Buffalo Trace Distilling would like to proclaim that Weller Special Reserve should cost you around $18 a bottle, mine cost me $24. However, I shall *not* complain as a 30% markup on this stuff is completely justifiable, because: damn, this is great stuff! (And, I’ve seen this stuff go for over $150 on the secondary market!)

Oh, Weller. How I’ve missed you!

A healthy sniff of Weller Special Reserve grants your nose access to luscious vanilla, caramel, and nuts. Which is to say: the scent is mostly barrel, with a touch of corn.

The taste is caramel corn, vanilla, and honey. Without the rye, there is quite a bit of flavor breadth missing, but there’s plenty of depth.  Let this wheated Bourbon rest on your tongue for a bit and the honey turns to clover honey, the caramel corn gets a bit of sea salt, and the vanilla gets richer.

The “whiskey burn” I’ve come to expect from something in this price range never appears. The finish is pure lingering warmth.

Weller Special Reserve is definitely one of those Bourbons where I could just put the bottle in the middle of the table and hold court all evening.

It’s smooth, it’s sweet, it’s infinitely approachable.  if you claim to be a fan of Bourbon, Weller Special Reserve Wheated Bourbon deserves your attention.  If you can find it for less than $25 a bottle, get as many as you can. Because, with this quality at that price point, you get…